I. Spelling Games: (Two players: Player A and Player B)

(1) Building Words:  Each in turn casts two or more blocks and combines letters to make words. Whoever creates a word first or makes the most words wins.
■ Example:  Two blocks are randomly selected and cast. They display the letters “e” and “k”. Use the two letters to spell words that contain e and k, such as desk, keep, key, peck.

II. Spelling Activity: Each player in turn says a word for the other player(s) to spell using the appropriate blocks.
■ Example: Player A says “fox”, then Player B selects blocks to form the word, “Fox” (f-o-x).

*Parents and family members can design other spelling games or activities. 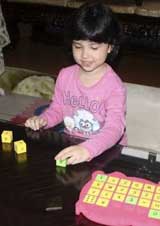